HAPPY NEW YEAR to everyone!! The end of 2013 was quite a whirlwind between the holiday season and the climactic finale of my primary deejay residency with friend/brother/mentor Jeremy Sole, the long running AFRO FUNKÉ event, which culminated in two very special nights. First, our GRAND FINALE event took place on December 19th featuring two records or 8-minute sets by cream-of-the-crop LA deejay talent (see photo below!) including JURASSIC 5’s Cut Chemist and Nu-Mark!! Trying to describe the epicness and level of love in the room that night could in no way do it the justice it deserves…sorry to say, but YOU HAD TO BE THERE!! It felt as if all of LA, but certainly our core family and friends, showed up en masse to passionately testify what our event had meant to them over the years. I’ll just say that it was incredibly lovely…

Then there was the December 26th Family Appreciation Night, which Jeremy and I planned as our sweet little love letter to the many beautiful regular supporters who filled our dance floor over the years…it turned out to be quite the farewell with roughly 350 family members getting down on the dance floor and in the walkways. 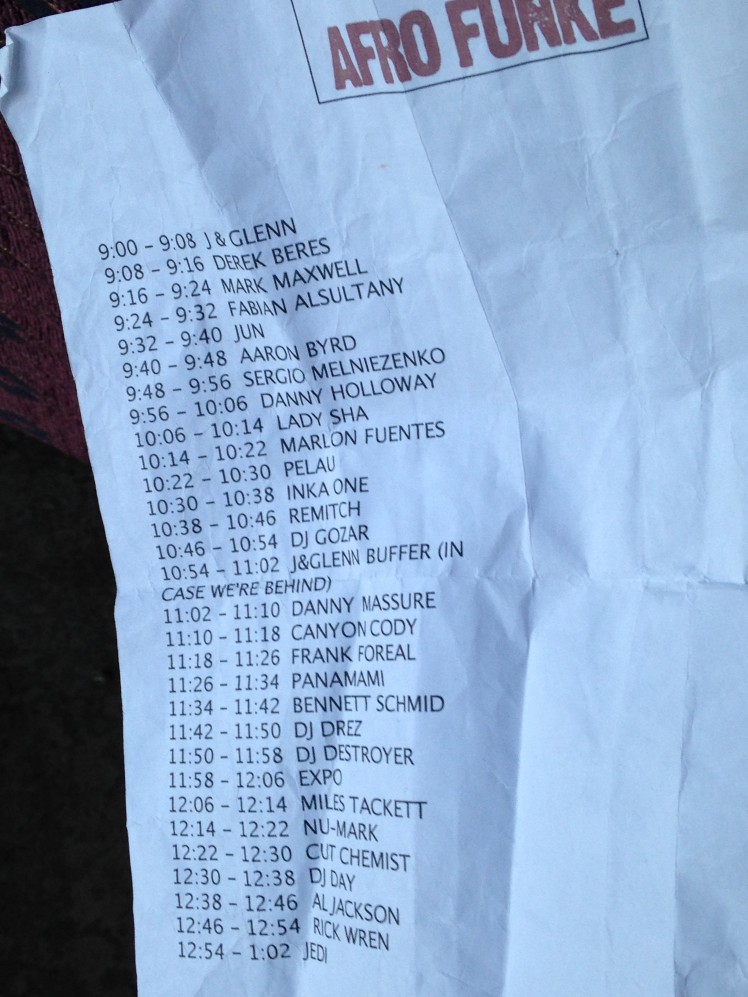 a photo of the official AF Grand Finale deejay schedule. Quite the memento 🙂

Check out Farah Sosa’s awesome collection of photos from our Grand Finale event at her Farahstop blog page.

Photos of our Family Appreciation night can be found here at this Facebook post by EnClave LA: AF Family Farewell

And of course, I have to cap this post with HUGE, SINCERE “THANK YOU’S” to Jeremy Sole, Cary Sullivan and Rocky Dawuni for some life-changing times at Afro Funké!!!